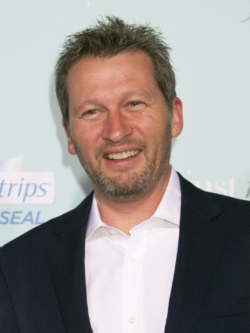 Ken Kwapis is an Award winning director who has moved easily between the worlds of feature filmmaking and television directing. He directed the Warner Bros. comedy “License to Wed” starring Robin Williams. He previously directed “The Sisterhood of the Traveling Pants,” a film adaptation of Ann Brashares’ best-selling novel.

For television, Kwapis helped launch some of the most innovative comedies of the past decade. He directed the pilot of NBC’s Emmy award winning series “The Office,” starring Steve Carell. He received a 2007 Emmy nomination for directing the episode “Gay Witch Hunt.” Kwapis also earned an Emmy nomination for his work as a producer-director of FOX’s “Malcolm In The Middle.” He directed the pilots for the groundbreaking HBO series “The Larry Sanders Show,” and the Emmy Award winning “The Bernie Mac Show.”

Through his body of work, Ken has a natural ability of reaching into the emotions of the human condition whether be it heart felt or amusing and bringing them out.