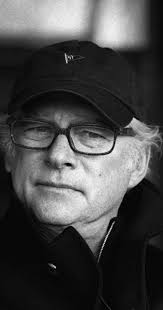 One of the most versatile American filmmakers of his generation, Levinson’s movies showcase subjects as diverse as the immigrant experience, mob intrigue, and political satire. He earned particular acclaim for his semi-autobiographical portraits of life in 1950s Baltimore, a topic that he explored to great effect in Diner, his 1982 directorial debut.

Born in Baltimore in 1942, Levinson was the son of a warehouse manager. Initially intent on a career in the media, he studied Broadcast Journalism in college but didn’t remain there long enough to earn a degree. He instead switched his interests to acting and standup comedy, and, after serving a stint as a staff writer on The Carol Burnett Show, he was hired by producer Mel Brooks. The first film to carry a screenwriter credit for Levinson was Silent Movie (1976); this was followed by Brooks’ High Anxiety (1977), which also featured Levinson as a vengeful bellboy in the film’s celebrated Psycho parody scene.

Levinson’s first directorial job was the low-budget Diner (1982), the first installment of his “Baltimore trilogy” (the others were Tin Men (1987) and Avalon (1990). Diner served to showcase several stars-to-be, among them Mickey Rourke, Ellen Barkin, and Daniel Stern. A poignant, critically acclaimed, coming-of-age story, the film helped to establish Levinson as a bankable director. This status was further solidified with such purely commercial projects as The Natural (1984) and Young Sherlock Holmes (1985).

In 1988, Levinson tackled one of his most ambitious projects in Rain Man, the remarkable saga of a disaffected yuppie’s deepening relationship with his autistic savant brother. An all-around success, the film won numerous Oscars, including Best Picture, Best Director for Levinson, and Best Actor for Dustin Hoffman.

Levinson had little difficulty imposing his own personal stamp on such star-oriented films as Good Morning, Vietnam (1987), starring Robin Williams, and Bugsy (1991) starring Warren Beatty. He also had critical luck with Sleepers (1996) the disturbing tale of four lifelong friends seeking retribution for abuse they suffered as young boys at reform school. The following year proved to be a banner one, as Levinson had two critically acclaimed hits, one as the producer of Donnie Brasco, starring Johnny Depp as an undercover cop who develops a dangerous friendship with mobster Al Pacino; and the other as the producer/director of the sharp political satire Wag the Dog, starring Dustin Hoffman and Robert De Niro.

Following a foray into science fiction with Sphere, again starring Hoffman, Levinson literally and figuratively returned to his home turf in 1999 with Liberty Heights. The story of two Jewish boys growing up in Baltimore in the ’50s, that film featured the familiar Levinson themes of family ties, ethnic tension, Cold War anxiety, and the growing pains of a changing society.

Levinson next took a side road into documentary directing, helming The 20th Century: Yesterday’s Tomorrows (2000), a look at what Americans vision of the future had been during that century, and Original Diner Guys (1999), following the lives and interrelationships of Levinson’s friends that had inspired his film Diner. The director then made a return to comedy With An Everlasting Piece (2000) about wig salesmen in 1980s Belfast caught in the Protestant/Catholic conflict; Envy (2004), starring Ben Stiller as a man envious of his best friend’s (Jack Black) success; and Bandits (2001), an amusing tale of two bank robbing buddies (Billy Bob Thornton and Bruce Willis) who find themselves at odds over a bored housewife (Cate Blanchett) they’ve taken as a hostage.

As a producer, Levinson had a hand in overseeing high-profile films he did not also write or direct, including The Perfect Storm (2000) and Analyze That (2003). After his television success with Homicide: Life on the Street, Levinson also served as executive producer for several other smallscreen efforts, including the acclaimed, hard-edged HBO prison drama Oz (1997-2003).

Back in the feature world, Levinson returned to familiar territory—politics—with his election satire, Man of the Year (2006), starring Robin Williams as a popular talk show host whose mock run for the presidency shocks everyone when he actually wins. What Just Happened? is a Hollywood satire about a movie producer played by Robert De Niro who goes through two weeks of hell as he tries to get a movie made. Levinson’s latest movie is the critically acclaimed You Don’t Know Jack ( 2010) starring Al Pacino as Jack Kevorkian.

On the advertising front, Levinson shot a series of Webisodes for American Express with Jerry Seinfeld and a series of very successful Macy’s commercials with a huge array of celebrities.