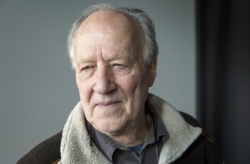 Werner Herzog is a world-renowned film director who has pioneered an impressive 60- plus feature-length films as well as multiple operas and shorts. French filmmaker François Truffaut once called Herzog “the most important film director alive” and American film critic Roger Ebert stated that Herzog “has never created a single film that is compromised, shameful, made for pragmatic reasons or uninteresting. Even his failures are spectacular.”

Werner was born in Munich and grew up in a remote mountain village in Bavaria and studied History and German Literature in Munich and Pittsburgh. He made his first film in 1961 at the age of 19. With a relentless dedication to filmmaking and a master of storytelling, he has produced, written, and directed legendary films such as Aguirre, The Wrath of God, Nosferatu, Fitzcarraldo, Lessons of Darkness, Little Dieter Needs To Fly, My Best Fiend, Invincible, Grizzly Man, Encounters At The End Of The World, Cave Of Forgotten Dreams. In addition to his filmmaking, Werner has also published more than a dozen books of prose.

Werner has won numerous awards including: the Silver Bear Extraordinary Prize of the Jury for his first feature film Signs of Life; he was honored with the Film Society Directing Award at the 49th San Francisco International Film Festival; Werner’s Grizzly Man won the Alfred P. Sloan Prize at the 2005 Sundance Film Festival; Encounters at the End of the World won the award for Best Documentary at the 2008 Edinburgh International Film Festival and was nominated for the Academy Award for Documentary Feature, marking his first Oscar nomination.

Werner helmed his first commercial campaign, a 30-second spot PSA for BBDO and AT&T which he turned into a 35-minute documentary film. The poignant Don’t Text and Drive PSA campaign went viral and received international press- Variety called the film “one of the most effective public service messages ever,” and Adweek stated that it was “impressive in it’s subtlety; complex and compassionate in its handling of the people involved—simple and direct in its message.”

His latest directorial project is the documentary film in association with NetScout, Lo and Behold: Reveries of the Connected World, about the perils of the internet. Lo and Behold is premiering at the 2016 Sundance Film Festival.