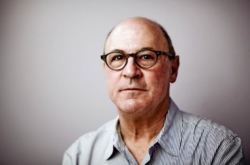 Robert Kenner has been called “a master of the documentary form” and has won an array of awards for his entertaining and insightful documentary work over the past 30 years. His latest film Command and Control was short-listed for the 2017 Academy Award®. His Academy Award® nominated and Emmy-winning film Food, Inc. had a monumental impact on how our food is regulated and is one of the highest grossing theatrical documentaries of all time. Kenner’s rich body of work includes Merchants of Doubt, Emmy Award-winning Two Days in October, HBO’s When Strangers Click, and The Road to Memphis for Martin Scorsese’s series The Blues on which Kenner was co-filmmaker with Richard Pearce. Kenner has directed a number of specials for American Experience, HBO and National Geographic as well as award winning commercials and short form docs for clients including eBay, Hallmark and Hewlett Packard. Kenner is currently working on a film about parrot therapy for veterans with PTSD, a series about the greatest conspiracy in law enforcement history and a feature about the pharmaceutical industry.