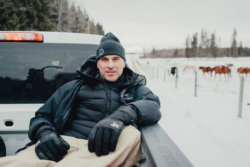 Patrick has worked around the world as a writer, director and creative director and is currently directing/showrunning Season One of the six part documentary series VACATIONS OF THE BRAVE for Amazon Prime Video, US. Patrick has directed commercials for Nike, Toyota, The Body Shop, Telus, Quaker, Erste Bank, and numerous other major brands, and wrote and directed the BMW short film DRIVE, which won gold medals at the World Media Awards and the New York Festivals of Advertising. He is founding Creative Director of the UK film and television site Blinkbox and has also been Creative Director for the UK video production company Breakfast of Champions and for TBWA/Chiat Day, New York. As a journalist, Patrick has contributed to Canada’s Globe and Mail and National Post and the UK’s News of the World.