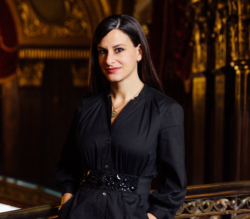 Laura Checkoway’s Edith+Eddie received an Academy Award nomination for Best Documentary Short in 2018 and has won numerous awards for documentary filmmaking including the IDA Documentary Awards Best Short. The film is executive produced by Steve James and Cher.

Laura’s award-winning debut film LUCKY (also executive produced by Steve James) screened at festivals across the globe and premiered on television in 2014. It’s available on iTunes, Amazon and Vimeo on Demand. Laura’s work earned a social impact grant from NBC Universal and the American Film Institute and a Nonfiction fellowship with the Carey Institute for Global Good in 2018.

With a background in journalism, Laura penned revealing celebrity profiles and investigative features for many publications including Rolling Stone and she was senior editor of Vibe magazine. She co-authored the acclaimed book My Infamous Life: The Autobiography of Mobb Deep’s Prodigy and the New York Times Best Seller My Voice: A Memoir by Angie Martinez.